Daesh Murders in Manchester and Egypt

The fight with Daesh in Mosul shows a variation on the theme. Daesh embeds itself among civilians, thus ensuring civilian deaths. While they can, Daesh uses human shields, murders civilians that they accuse of working with the enemy, and arranges to escape as quickly as possible. They are continuing to fight in Mosul only because they don’t have an easy escape route.

Daesh is commanded and staffed by cowardly thugs.

Posted by Wolf K at 10:30 am No comments: Links to this post

Is 2 Minutes enough to Solve a Crime?

Donald J. Sobol. Two-Minute Mysteries (1967) Scholastic books for many years offrered books to schoolchidren, with a cut of sales going to the school's extra-curricular programs. One the most popular categories among middle school students was puzzle books. This is an example; there were many versions on it, including 5-Minute Mysteries.
This one pffers 79 puzzles, all fairly placing the clues, but too many relying on non-general knowledge, with at least one error: the author claims that a right-handed man “invariably” puts his trousers on left leg first. Well, I don’t. Some illustrate how culture and general knowledge change over time: a puzzle asserting that a Professor of English wouldn’t make certain errors no longer flies. Besides, is mistakes usage for grammar.
A few puzzles are ambiguous, with an alternative solution possible. However, the vast majority demonstrate that a small mistake is enough to convict a crook.
There are of course recurring characters, the hero is Dr Hanedjian, his friend Inspector Winters, Nick the nose whose attempts at earning a few extra dollars by supplying information to the police always fail, and so on. I read the book in two sittings, having been interrupted after reading the first dozen or so. **½
Posted by Wolf K at 9:18 am No comments: Links to this post

Lost in the snow: Ellis Peters. The Will and the Deed

Ellis Peters. The Will and the Deed (1960) One of Peters’ first books. It’s a nicely done closed group puzzle. Isolated following an emergency landing in a snow-bound valley, Antonia Byrnes’ six heirs have to come to terms with her capricious bequests. Which of them murdered her old friend when he was writing a new will repudiating her bequest of almost all her estate to him? Peters is at heart a writer of love romance, and likes to create ambience. She does a good but unnecessarily extended job of describing what it’s like to bring back a person almost dead from a morphine overdose, and a chase through deep snow and almost lethally bad weather. But she draws plausible characters, and gives us a nice mix of clues and red herrings. **½
Posted by Wolf K at 10:45 am No comments: Links to this post

So you think you'd be a good detective?

M. Diane Vogt. Bathroom Crime Puzzles (2005) Even if you have an expert knowledge of forensics and law, you will not be able to solve all 65 of these puzzles. About half a dozen omit crucial information needed for the solution. But the rest are fair puzzles. In a novel, some forensic expert would provide the forensic significance pof the clues, leaving it to the reader to apply them to the case. Or watch detective do so, and second-guess the solution before All Is Revealed. The puzzles have the ring of truth: the backstories in the solutions add information about motives, etc, which only a person close to the actual case would know. I enjoyed reading this potato chip book. For a mystery writer, it’s a compendium of ready-made plot outlines. **½
Posted by Wolf K at 10:37 am No comments: Links to this post

Smarter than an octopus? Maybe not.

Recent dicussion on a Usenet group about a picture of octopuses "researching" a human diver prompted a search. Cephalopods are smart. See So You Think You're Smarter Than a Cephalopod? from the Smithsonian website. 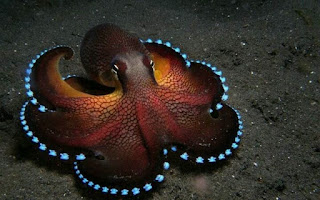 Posted by Wolf K at 8:57 am No comments: Links to this post

I subscribe to Usenet groups. A few days ago, there was a brief conversation about the ignorance of people in general, and the younger generation in particular. I’d heard it all before. The following is a slightly revised version of what I wrote.

People are smart about different things. Always have been. Necessary and useful knowledge changes from one generation to the next. In the Olden Days, it changed very slowly, so that what an elder knew was useful not only to children but to grandchildren and great-grandchildren. Now it changes so fast that much of what you learned a few decades ago is now obsolete. For example, a lot of stuff I learned about cars when I was a kid was already obsolete when I learned to drive. My uncle showed me how to baby a choke to keep the engine running until it warmed up. He  kept a cork in his Morris 8 to wedge between the choke knob and the dash to hold the choke cable out until the engine warmed up. The car I learned to drive on didn't have a manual choke.

The rate of knowledge obsolescence has speeded up enormously. Read a mystery novel from 10 or 20 years ago, it's already historical fiction. Same goes for old TV shows and movies. It's easy to believe that the young 'uns are ignorant. They're not. They not only don't know what we know, they don't need to know it. They know other stuff, just as we knew stuff our parents didn't know (and didn't think worth knowing).

It’s worse, if that’s the word, when it comes to wisdom and insight. What's really worth knowing is for the most part unlearnable until you have enough experience to even recognise it as knowledge, let alone as useful knowledge. "Too soon old and too late smart". That's life.

Anyhow, all of us rely on other people's say-so for most of what we think we know, just as they rely on us for what they think they know. There's very little firsthand knowledge and analysis in anybody's head. Not enough lifetime to do much more than learn what you need, and a bit of what you like. We take other people's word for almost everything. See The Knowledge Illusion, published around the same time as our discussion of the kids’ unwillingness to learn from us became a topic for discussion.

Quick now, what does the heart do? How does it work? How do you know? Did you do the dissection and observations yourself? Etc. And how come humans dissected human and animal bodies for thousands of years before Harvey realised the heart pumped blood around the body?
Posted by Wolf K at 7:39 pm No comments: Links to this post

Graham Thomas. Malice in Cornwall (1998) A glowing corpse washes up on the north Cornwall beach, Insp. Erskine Childers is called in, his sidekick Sgt Black has memorise lots of poetry, the locals are the usual collection of country weirdos and incoming weirders. There’s an ancient unsolved murder, a new murder, blackmail, smuggling, bad food, good food, Erskine’s wry reflections, adultery, back-to-the-land romanticism, and so on. It’s a mildly engaging mix that afforded me a couple or three hours of pleasant reading. The novel improves towards the end, Thomas was I think still learning his craft. No fancy forensics, no cell phones or computers. Worth a look if you're looking for low-stress entertainment. **
Posted by Wolf K at 7:05 pm No comments: Links to this post