Peter Robinson. The Hanging Valley (1989) The title refers to a geological entity: a valley carved into a valley side  at roughly right angles  to the main valley, ending high above it, usually with a waterfall. There's one above Swainshead.  What was once a hanging crime is done there: murder. The victim’s face has been hacked to prevent identification, but Banks has a lucky break: the man’s dentures have a serial number. Knowing his identity doesn’t help much. It takes patient assembly of small clues, and a visit to Toronto to unravel the knot. Robinson uses the latter to indulge in a bit of a rant about the anti-intellectual attitudes of Canadian community college students.
Below average for the series, with work-manlike narrative, and an attempt at Rendellesque psychic pathology. Still, better than most crime stories. ***
Posted by Wolf K at 3:39 pm No comments: Links to this post

Sue Grafton. U is for Undertow (2009) A 20-year-old cold case is revived when Michael Sutton asks Kinsey Millhone to find out whether his childhood memory of two “pirates” digging a hole is related to the kidnapping and presumed murder of a five-year-old girl. Many twists and turns later it turns out Sutton was right. I won’t describe the path the Millhone traverses to the truth. The book is Grafton at the top of her form, successfully experimenting with a multiple-POV narrative structure, and giving us well-imagined characters, a nicely paced quest for information, and a few more bits and pieces of Millhone’s family back-story. Her publishers have given her room for the digressions that enhance character and ambience and enrich the setting. Well-done, above average for the series. ***
Posted by Wolf K at 7:25 pm No comments: Links to this post

A Brd of Rare Plumage (George Johnston: The Cruising Auk)

George Johnston. The Cruising Auk (1959) Johnston is I think a much underrated poet. He writes light verse, intended to amuse, but he’s a melancholy clown, more attuned than most of us to the absurdities of human life, and acutely aware of the thin membrane that prevents the tears of despair from infecting the tears of laughter. Water is a frequent image in his poems, poems like stones skipped over the surface, which sink into the darkness at the end of their journeys.
A couple of samples:

War on the Periphery

Around the battlements go by
Soldier men against the sky,
Violent lovers, husbands, sons,
Guarding my peaceful life with guns

My pleasures, how discreet they are!
A little booze, a little car,
Two little children and a wife
Living a small suburban life.

I watch their tenderness with fear
While on the battlements I hear
The violent, obedient ones
Guarding my family with guns. 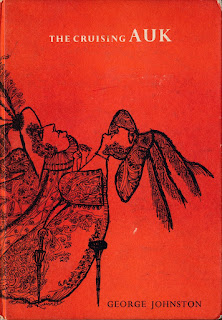 I’ve reread these poems several times. Many years ago, when poetry readings were in fashion, we attended a reading. Johnston was a diffident reader, he seemed surprised that anyone would take his verses seriously. But he was one of the few poets who could read his poems well. Wikipedia has a short entry.  ****
Posted by Wolf K at 9:26 pm No comments: Links to this post

Derring-Do on the Moon and Beyond (Poul Anderson: Harvest the Fire)

Poul Anderson. Harvest the Fire (1995)  Setting: a far-future Earth is governed and served by the cybercosm, a self-aware network of computers which could store the self-aware digital versions of humans, who by this process became part of it. It also creates sophotects, self-aware autonomous artificial intelligences that via robotic extensions of themselves carried out the grunt work that humans no longer want to do.
Plot: Some Lunarians (genetically modified humans adapted to life in low gravity) want to steal a batch of anti-matter. One of them, Falaire, seduces Jesse Nicol, a space pilot who wants to write poetry. Nicol is drawn into the conspiracy, but a (temporarily) downloaded person, Venator, has been deployed to prevent the plot. Venator is captured by Lirion, but on the flight to the anti-matter transport vessel, Nicol discovers him, and must decide how to proceed. In the end, he joins the conspirators, but on how own terms.
Writing: better than average for SF. Anderson invents characters to suit his plot and setting, but skilfully enough that they can carry the themes. The book has the marks of pulp-fiction: swift development, jumps in narrative, no digressions, just enough description to allow us to imagine the social as well as the physical setting. That makes for a quick read, but the lack of room to explore more implications of the themes limits the appeal of the book. I liked it, but would have been just as happy with a fatter volume with tangled plotlines, more characters, more stories. Above average pulp fiction. **½
Posted by Wolf K at 9:21 pm No comments: Links to this post

A movie and a concert

The Wind Rises (2013) (D: Hayao Miyazaki. Voiced by Joseph Gordon-Levitt, John Krasinski, Emily Blunt et al ]
A biography of Jiro Horikoshi, designer of Japanese WW2 fighter planes. The story’s simple: Horikoshi is near-sighted, so he can’t qualify to fly planes. Instead, he designs them. He falls in love, but the girl has TB. However, they marry, and have a short time together before she dies. The story of the design successes and failures is well done, the personal life is touched on rather than told, and the subtext is definitely anti-war, mixed with pride at the success of Japanese engineering. It’s an animé movie, a style that occasionally jars: I don’t like the way in which grief and other strong emotions are portrayed. But overall it’s well-done. Recommended. ***

Blast From the Past: Louise Lemieux Does the ‘50s Louise sang mostly standards, mostly love songs, and mostly the ones that were hits because of teenagers: Bye, Bye Love; Are You Lonesome Tonight; Only You; Peggy Sue; etc. Teen angst is not new, only the recent worry that it’s a sign of emotional fragility is. She also likes songs from the musicals: I Could Have Danced All Night; Oh, What a Beautiful Morning; etc. She’s a performer who happens to use songs to entertain, and she does a wonderful job of it. We’ve known her for a long time, and have always enjoyed her concerts. The show was not sold out, which means some people missed a great evening’s entertainment. ****
Posted by Wolf K at 10:09 pm No comments: Links to this post

Peter Robinson. A Dedicated Man (1988) The second Banks novel. Harry Steadman, an academic with no enemies, thoroughly dedicated to his work, lies under some stones with his head bashed in. Chief Inspector Banks becomes convinced that the solution lies in the past, when Steadman and his wife Emma used to come to Swainsdale for their summer holidays, and for his field work in industrial archeology. Steadman has come into an inheritance, which enables his purchase of the house that he summered in, and gives him the time he wants to pursue his obsession. It’s this dedication to his avocation that does him in. Add a clever but naive sixteen-year-old girl with dreams of becoming famous, a nicely selected cast of suspects, some folk music, and of course the looming fells of the Dales, as well as unusually pleasant summer weather, and you get a well-done entertainment.
Not up to the standard set by the first book, but good enough. We don’t learn much more about Banks and his life, though, which may be the reason I didn’t find this as satisfying a read as the other Inspector Banks books I’ve read. **½
Posted by Wolf K at 9:24 pm No comments: Links to this post

Service of All the Dead: Morse gets most of it right.

Colin Dexter. Service of All the Dead (1979) The rector falls to his death from St Frideswide’s tower. Not too long before that, the church warden was murdered. The cursory investigation concludes that the rector murdered the warden, then repented and killed himself. Morse doesn’t buy it, and sets off on one of his typically convoluted and hare-brained searches for the truth. The case ends when the body count reaches 5, and Morse interrupts the murderer’s attempt to raise it to 6. Morse gets most of case right, carefully hides part of it from the perjury trial of one of the witnesses, and never finds the final clue that lets the reader know the complete solution.
A typical Dexter, with a good puzzle, soft and not so soft porn tossed in, careful descriptions of Oxford, and better than average characterisation and ambience. But Dexter has an irritating habit of the “little did he know” tip-off to the reader, along with the knowing wink about somebody’s peccadilloes. A good enough read, but the TV series is much better. **½
Posted by Wolf K at 7:46 pm No comments: Links to this post

Groff Conklin. 12 Great Classics of Science Fiction (1963) This collection marks the border of the shift from the technological age of SF, when writers and readers were satisfied with gee-whiz extrapolations of gadgetry (later affectionately satirised in Inspector Gadget and Bruce McCall’s drawings for Esquire, New Yorker, etc), to the subsequent sociological age, when writers explored the social and psychological effects of extrapolated social and technical trends. For example, “Thirty Days had September” does a what-if supposing all social institutions are “sponsored” and operated by corporations. The collection also shows a shift to more subtle attempts at imagining the Alien, a task that’s inherently impossible, but which dreamlike fantasies approximate, as in “On the Fourth Planet”, which imagines a dying race of Martians barely subsisting by nibbling bacteria off lichens. Every story prompts thoughts beyond itself. Recommended, if you can find a copy. ***
Posted by Wolf K at 9:57 pm No comments: Links to this post

A Death in Venice: Brunetti on the case

Donna Leon Death at La Fenice (1992) The first in the Commissario Guido Brunetti series, reprinted in 2004. I’d heard of it, but paid no attention. Now I will read them all, in order if possible. The setting is the La Fenice opera house in Venice, the victim is the world-famous conductor Helmut Wellauer, the suspects include some singers, the director, musicians, assorted lovers, journalists and gossips, and of course the widow. Politics as well as standard Italian-style corruption, Wellauer’s history, Brunetti’s family, and Venice itself make for a wonderful mix. Leon’s forte is the casually inserted detail and stray thought, which create character, setting, and ambience. The resolution is satisfactory, and the long and winding road to it is a delight to follow. Brunetti is professional, humane, and persistent. His love for his family is believable, as are his partly cynical and partly collegial relationships with his fellow cops. Recommended. ****
Posted by Wolf K at 7:45 pm No comments: Links to this post

The Ruins of Earth: gloomy forecasts of the End.

Thomas M. Disch. The Ruins of Earth (1973) A collection of short stores about how and why Earth is doomed. At the time, the “population bomb” was on everyone’s mind, and Harry Harrison’s “Roommates” illustrates an extrapolation of its effects. He later expanded it into a novel, which was adapted into the movie Soylent Green. The time scale was off, but Harrison’s ideas if anything underestimate what will likely happen when the climate tips. Climate change is a side-effect of our overpopulation: at present, our annual consumption of renewable resources is about 1.25 times as much resources as the planet’s systems can replace. In addition, we are adding CO2 and other pollutants to the atmosphere faster than the planet’s systems can process them. Disaster is inevitable. The only uncertainty is about the scale and rate of the disaster, and whether or not we can adapt in time to prevent extinction.
All the stories are worth reading. Most are satires, albeit not particularly funny ones. ** to ***
Posted by Wolf K at 2:40 pm No comments: Links to this post