Wycliffe digs into the past: Wycliffe and the Four Jacks 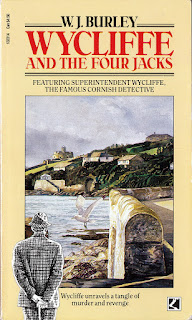 Wycliffe and the Four Jacks (1985) A famous but extremely publicity-shy writer ends up dead after receiving five warning letters in the mail. Wycliffe happens to be on holiday in that part of Cornwall, so of course he has to lead the investigation. As often with Burley’s stories, the past is the key to the murder. A typically low-key Wycliffe tale, with nicely done local ambience, and enough glimpses of Wycliffe’s marriage, his collegial relationships, and local people to create a world, one that I like to live in for a few hours. I think Burley’s Wycliffe stories are undervalued. There was a TV series, too. Recommended. ***
W. J. Burley.
Posted by Wolf K at 10:43 am No comments: Links to this post

[Project Team]. Uncle John’s Bathroom Reader: Cat Lover’s Companion (2006) The Bathroom Readers began as edgy, often rude, eclectic collections loosely related to some theme. I emphasise loosely. Fun reads, excellent potato chip books. This one lacks the edginess, doesn’t roam into “that reminds me” territory, and tells not only bland but useful stories. I found it at a Value Village, and should have left it there. *
Posted by Wolf K at 10:32 am No comments: Links to this post

Rex Stout. Death Times Three (1985) Two uncollected magazine stories and an unpublished one. The usual snappy narrative by “Archie Goodwin”, Nero Wolfe in fine form, solving neatly plotted puzzles, all fairly clued, and just enough characterisation to keep us interested for the fraction of an hour’s entertainment offered by each tale. I found this at a yard sale, still in print, available from the usual sources. At 25 cents, the price I paid, a great bargain. ** to ***.
Posted by Wolf K at 8:57 pm No comments: Links to this post

Simon Winchester. Krakatoa (2003) Another yard sale find. This book became a best-seller on publication, and made Winchester something of a media personality. He’s written a few more books since then. If they are all at least as good as this one, they’re worth reading. It’s a discursive multi-layered history not only of the volcano’s eruption (and destruction) on August 27, 1883, but of geology and vulcanology. It wasn’t until the early 1960s, when plate tectonics (first adumbrated by Alfred Wegener) was elucidated, that the mechanism of the eruption was understood. Confession: I grew up when Wegener’s theory was still characterised as pseudo-science, and I felt vaguely embarrassed for feeling there might be something to it. A salutary reminder, in hindsight, that it’s not easy to tell the difference between crackpot and incomplete theories.
Winchester’s talent is creating a large and detailed story combining many narratives. If that occasionally creates longeurs, that’s a low price to pay for finally understanding how it all hangs together. The book is still in print, and used copies are available from all the usual sources. Recommended. Look for Winchester videos on Youtube. *** See also The Professor and the Madman.
Posted by Wolf K at 2:55 pm No comments: Links to this post

1930s German Taste: A book of photos taken with a Rollei

Walther Heering. Le Livre D’or du Rolleiflex. (1936) Paul Franck and Reinhold Heidecke teamed up in 1920 to produce optical stereo cameras. They used their experience to design and make the Rolleiflex, a twin-lens reflex camera that earned a well-deserved reputation for technical excellence and reliability. Its design was copied by several other makers, including Yashica: my father bought one of those at a Rexall drugstore in Edmonton, and eventually passed it on to me. I still have it. The technical problem with any medium or large format camera is to ensure corner to corner focus. Before computers enabled the design of lenses with complicated surfaces, lens makers had to rely on experience and skill. Plus a good dollop of intuition. Franck and Heidecke succeeded brilliantly.
So in1935 Dr Walther Heering sent out a request to users of the Rollei to send in their best photos, and this PR book was the result. Published in German, English, and French, it includes an historical essay by Heering, a list of contributors and technical details of exposure and film, and 180 rotogravured plates. The printing quality is excellent. The photos themselves, not so much. Grouped by subject, they are technically very good: excellent exposure, development, and printing. The book is clearly aimed at photographers, both amateur and professional, people who took picture making seriously. This collection of “excellent pictures” was intended to inspire would-be photographers, to show the reader how to make pictures “in his or her own way” with a Rolleiflex.
How well did Dr Heering succeed? If he intended to challenge photographers to extend their practice, he failed. If he intended to confirm them in their comfort zone, he succeeded. The photos tend to the sentimental, banal, pleasantly platitudinous. Yet this was the time of the photo-essay and reportage of LIFE and Picture Post. In the USA, the Farm Security Administration hired photographers to record the effects of the Depression. Stieglitz, Steichen, Strand, Adams, Cartier Bresson, Man Ray and many others had shown what could be done with photography. They used the camera to extend seeing, to enlarge one’s visual understanding of the world.
None of the images in this book prompt one to reconsider what one is looking at. They are nice pictures, presenting a world of nice people doing nice things. The selection holds to the notion that art should show beautiful and interesting things, not that art should make things look beautiful and interesting.
As a collection of photos, average; as documentation of German taste in the 1930s, useful. **
Posted by Wolf K at 7:37 pm No comments: Links to this post

Amelia Frances Howard Gibbon. An Illustrated Comic Alphabet (Designed 1859. Published 1966). Howard Gibbon was a teacher who designed this alphabet to help her charges learn their letters. The manuscript was donated to the Osborne and Lillian H. Smith Collection of the Toronto Public Library, who arranged publication by Oxford University Press. It’s a charming alphabet, firmly in the style of children’s book illustration of the mid 19th century.
It illustrates a well-known rhyme, “A is for Archer, who shot at a Frog....” Except for the ones explicitly named as women, the figures are all boys about 10 years old, dressed up in suitable costumes, standing or performing in equally suitable landscapes. The text is beautifully rendered in a fanciful typeface, with the initial letters coloured red. Well done. I wonder why Howard Gibbon did not publish her manuscript.
She has an interesting history. Granddaughter of the 11th duke of Norfolk, and a cousin of Edward Gibbon (author of The Decline and Fall of the Roman Empire), she emigrated to Canada with her widowed mother. This book’s endnote has more details. The book was published by and for the Friends of the Osborne Collection. I was a member for a few years in the 1970s. The Friends have issued reprints of several classic children’s books in the collection. I don’t know if they’ve published other manuscripts. This book rates ****.
Posted by Wolf K at 4:58 pm No comments: Links to this post

Thomas Grumley. Quebec Light & Power Company: Montmorency Division (2006) Published by the Bytown Railway Society, well known for its albums of historical photos. As a photo-album, this book is pretty good. It seems that the Montmorency Division didn’t attract many photographers until it reached the end of its life. Most of the photos date from the 1951-1954 period when it was under CN ownership, and the selection is somewhat repetitive. The last scheduled passenger train traversed the line on March 15, 1959.
As expected, photo reproduction is excellent. The captions are informative, and a couple of short essays summarise the line’s history. But there’s no map, and curious omission, since most readers will have at best a hazy mental image of Quebec City and its environs. A good read for the fan, adequate for the amateur historian. ** PS: An online search failed to produce a map. Bah!
Posted by Wolf K at 10:35 am No comments: Links to this post

[No editor credited] Railroads You Can Model (2002) Kalmbach’s Model Railroader for some years had a regular “Railroad You Can Model” feature. These were collected into two previous books, and finally a dozen were republished in this collection.
As the foreword points out (twice), these track plans are guides. With a couple or three exceptions, they aren’t meant to be built as drawn. They show how to adapt the information about the prototype into a workable design with enough detail to begin building. Two of the chapters show how the pieces that represent towns and yards could be placed around a room and spliced them together with additional track. (Such pieces are now called “Layout Design Elements”, or LDEs). The larger plans are merely one possible arrangement of LDEs, and as such are a good guide to layout design.
Most of the plans are for large rooms, single garage or half-basement size. A couple are 5x9 feet, slightly larger than the traditional 4x8 foot starter layout. For most readers, the book will have as much interest as a collection of histories (The Ma & Pa, McCloud River RR, G&MO, NY&O, etc) as a collection of track plans. **½
Posted by Wolf K at 3:07 pm No comments: Links to this post

Lolly Winton. Good Grief (2004) I bought this book at the Food Bank Permanent Floating Yard Sale. The first two or three pages got me. I put it aside for later reading, and now, about a year later, I’ve read it. Was it worth the wait? Yes, in many ways. Its presentation of the effects of grief trigger recognition in anyone who’s lost someone close.
Sophie Stanton has lost her husband to cancer. She can barely cope. After appearing at work in her robe and pink bunny slippers, she takes a break. Eventually, she sells the house and moves to Oregon to be closer to her friend, who’s lost a husband to another woman. It’s here that the story begins to feel constructed rather than imagined. Sophie needs someone to distract her from her grief. H’m, let’s see, a new romantic interest? Check, a handsome actor, but there will be a few bumps on that road. Someone to care for? Check, a Little Sister, but ditto. An unexpected discovery of a new interest? Check, Sophie likes baking, which presents a Business Opportunity! So everything ends happily, and somewhat too easily.
Winton writes well, she gives Sophie a convincing inner voice. She’s especially good at the wry or mordant one-liner, which make Sophie a complicated and flawed self-appraiser. She knows she’s wallowing in self-pity, but she also knows she can’t really do much about that. It’s the occasional external shock (such as being moved from table service to the kitchen) that nudges her towards recovery from her depression.
It’s the other characters that don’t quite work: we see them entirely through Sophie’s reactions to them, and Sophie is more interested in her own responses to them than in their stories. She asks them hardly any questions. So they are barely more than brightly coloured cutouts.
Worth reading? Yes, if you’re looking for something that will pass the time agreeably but won’t be too demanding. It will I think help those who are still working through their grief. **½
Posted by Wolf K at 3:04 pm No comments: Links to this post