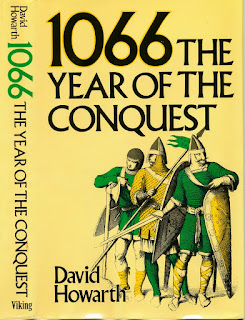 David Howarth. 1066: The Year of the Conquest (1977) Howarth wants us to understand how William the Bastard’s invasion of England came about, and how the pre-Conquest way of life was changed. The Conquest was not a sure thing: the odds were against William. He didn’t win the Battle of Hastings, Harold lost it, along with his life. What sources we have of the country’s mood after the battle suggests that it surrendered rather than resist William’s demands. Resistance might have worn William down.
Howarth has read the sources, and the attempts by historians to tease out the facts from the contradictory and propagandist accounts of William’s life. He suggests that understanding the psychology of the antagonists is key to understanding why William succeeded despite the odds against him. He believes that Harold lost his will to fight when he saw that William was carrying the Pope’s banner, and learned that the Pope had ruled in favour of William’s claim. This is I think as plausible an explanation of Harold’s failure to rout William’s troops, despite several chances to do so.
Horwath mourns th Anglo-Saxon polity that might have been, thus illustrating the persistent English nostalgia for an England that never was. Here it is 40 years later, and the same nostalgia, now crossed with a virulently anti-foreign strain, has given us the faux-memory of Empire that drives Brexit.
Well done, and enjoyable, not least because of its non-academic tone. ***
Posted by Wolf K at 2:34 pm No comments: Links to this post 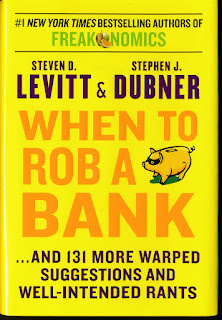 Steven Levitt and Stephen Dubner. (2015) When to Rob A Bank A collection of blog posts. If you liked Freakonomics, you’ll like this book. The posts cover a few of the same patches as that book and its successor Superfreakonomics, some new ones, and adds random personal musings. They also often ignore non-monetary incentives, even when the data makes it plain that money wasn’t the only or even the primary attractor. That is the only (and major) failing of this entertaining and enlightening collection.
Oh, about bank robberies: Per FBI data, there are about 20% more bank robberies on Fridays than Mondays. Make of that what you will. And embezzlers don’t dare take vacations, because their scams would easily be discovered by whoever covered their job. So a zealous bank employee who never takes vacations is likely on the take.
An index makes this a handy reference work when you want to refresh your memory of some oddity niggling away at the back of your memory. ***

Posted by Wolf K at 2:26 pm No comments: Links to this post 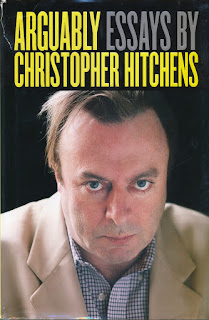 Christopher Hitchens. Arguably: Essays (2011) Published the year before his death, the book is a compendium of pieces Hitchens wrote for Vanity Fair, Slate, Newsweek, and other periodicals. Hitchens doesn’t like humbug, stupidity, fraud, cruelty, and other evils. He likes compassion, art, sense, democracy, peace, food, friends, literature, and other good things. He rails against the evils done in the name of religion, distrusts and hates all ideology, despises weakness that arms itself with a gun, and the British royal family. The latter was surely the deciding reason to migrate ot the USA and become a citizen. His love for America gave him reason to point at and criticise its failures to live up to its ideals. He was a journalist, and saw many of the horrors of the 20th century firsthand. His education at Oxford (he read philosophy, politics, and economics) gave him the habit and skills of thorough reading. He was a lifelong socialist, and hated both left and right ideologies.
Despite his rage at the cruelty and folly of humankind, most of his writing is witty and engaging. If you find this book, read it. ****
Posted by Wolf K at 2:23 pm No comments: Links to this post

Some ruminations about school 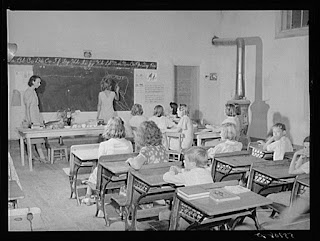 People who find school easy (roughly the top 10%) often have trouble at college and university, even if they've had to do homework. I was one such (in high school, I did all my math homework between classes), and had to take a year off after my 2nd University year. That also gave me some time to reflect on what I really wanted to do. It would have been better to have taken that year immediately after high school.

School is easy for some people because (even when the program is "streamed" by ability) the curriculum has to be aimed at the average student. But there is huge variation in both age (hence cognitive development), and innate and acquired abilities. In addition, human development is not a nice steady progress. It's extremely variable, both over time and in physical, cognitive, and emotional qualities. What a kid cannot learn in February, they may well have been able to learn in September, and vice versa. Not to mention that family life, socioeconomic environment, random crises, etc increase already existing differences among students.

The surprising thing is that the schools do as good a job as they do. In my experience that has more to do with the student-teacher relationship than anything else. If you like kids, like teaching, and like your subject, the students will co-operate with you and learn as well as they can.

Politically, the biggest problem IMO is that people seem to think "teach" is a transitive verb, like "paint". It ain't. If you paint a wall, it's painted, and it stays painted. If you teach a kid, they may or may not learn, and will probably forget most of what they've learned anyhow.

IOW, "teach" is what a teacher does and "learn" is what a student does. These two verbs together describe a complementary, symbiotic almost, relationship. If that relationship fails in some way, you have a problem. However, the critics of schools apparently want some kind of people-proof method, that, if applied correctly, will turn out the widgets, er, sorry, _graduates_ they want.

Recently, The Guardian and the CBC both had interviews wth Gladwell about our difficulty communicating with strangers. One of his theses is that we can’t reliably tell when someone is lying.

All human societies operate on codes of courtesy. To be polite is to pretend that what we see is what we get. It's a mutual acceptance of privacy: I won't try to find out what you're hiding if you don't try to find out what I'm hiding. We wear masks, the masks of respectability and trustworthiness. Gladwell explores how those masks differ from one society to another, and the inevitable misunderstandings caused by those differences.
Posted by Wolf K at 1:11 pm No comments: Links to this post