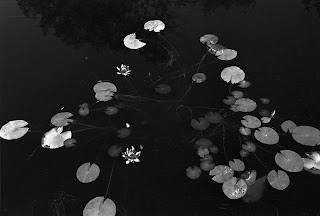 The Adcocks built a garden on St Joseph Island which was open to the public in the summer. In August 1989, the Blind River Horticultural Society sponsored a bus trip there. About 30 people came along. This is the waterlily pond.

Esso bulk plant in Nipigon, September 1969. Sharp eyes will note that it was served by rail. Fuel was brought in by tank car, other products by boxcar. Small bulk plants like this one have disappeared. 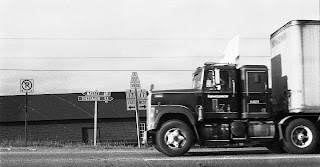 Eastbound truck on highway 17 at Blind River, August 1987. The highway was still two-laned then, and the CPR station still stood. That's the freight-shed end of it you see in the background. 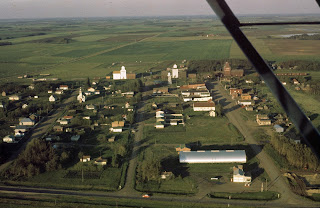 New Norway, Alberta, September 1969, looking east. The station (and passing track) and grain elevators are long gone, as is the curling rink, but the village is now a thriving satellite of Camrose. The school still operates, and a  number of new homes have been built. Photo by H. Kirchmeir. 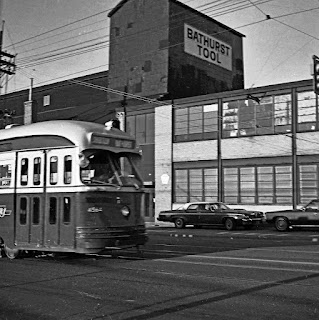 TTC 4564 on Bathurst Street, Toronto, October 1974. A search for Bathurst Tool indicates that it is now part of Futuretek, or vice-versa, and is located in Oakville. Photo by J. Kirchmeir. 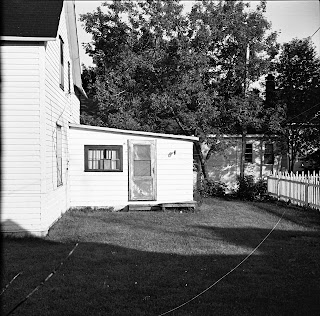 9 Patricia, Blind River, in June 1975, from our kitchen window. This house no longer exists. It had been divided into two apartments some years before we moved to Blind River. The Shamas sisters bought the property, and had it made into a parking lot for St Saviours Anglican Church (hidden by the trees in the background). 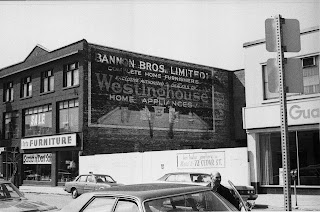 Downtown street scene in Sudbury, 1981. I'm afraid I don't know exactly where this is. If anyone can identify the location, please comment. I liked the painted wall, a common method of identifying buildings (and advertising the owner's goods and services) from the latter half of the 1800s until the mid-1900s. By the 1980s, such walls were rare. 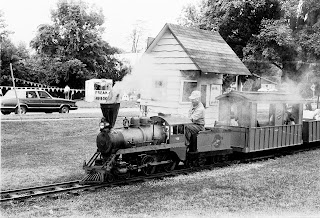 In 1987, we visited Niobe and her family in Orillia. We rode the Lilliput Train, which no longer exists, as its upkeep cost too much, and fewer people volunteered to operate it. As you can see, it had a real steam engine. It burned coal, and the smell of steam and coal smoke proved highly nostalgic 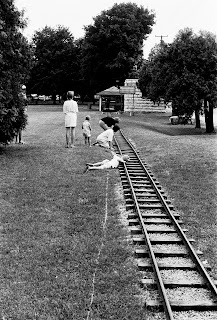 Here you can see some children listening for the train, which had disappeared behind the trees in the background. The train wasn't heavy enough to squash pennies, unfortunately.

Carlson's Dock, Blind River, February 1993. This photo was made with a cheap "panoramic" camera. I like the effect of the fixed-focus lens. 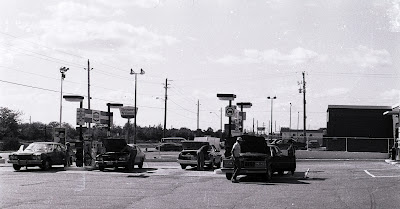 Texaco station in 1984, which became an Esso station shown in 1993. It was torn down. The empty lot is being colonised by grass. 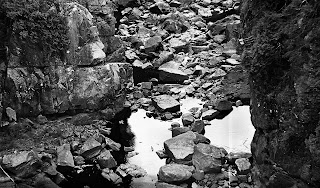 Aubrey Falls below the dam, August 1980. We had gone there to pick blueberries. The Aubrey Falls generating station was and is for supplementing power as needed. 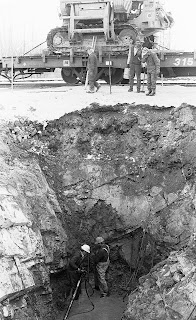 The steam engine was sold to a collector for, I believe, $50k. Because it was a collector's item.

It was sold in a sneaky way. The Town Hall called a very quick vote on the matter, with no warning.

They replaced it with an electric one.

(My folks live in Orillia, and this is the story I heard on it.)