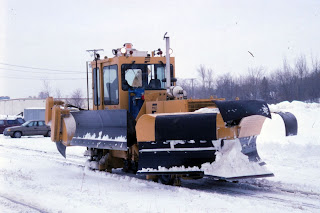 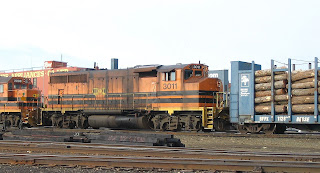 Huron Central Railway website. The HCRy is undergoing upgrading of the track. New ballast, some new ties, and some new rail. I've already noticed the effects: the trains run through Blind River at close to the maximum allowable speed of 50km/h. Trains are generally 30-50 cars, mostly coil steel cars or gons, tank cars with lime slurry for the steel mill in the Soo, pulpwood racks, bulkhead flats for slab steel, and occasional boxcars. 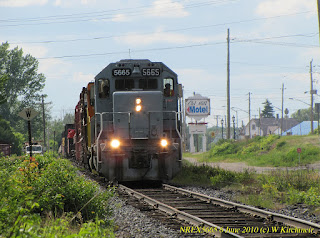 If you've seen the Tim Horton's commercial in which a train stops across from a Timmie's and one of the crew gets coffee and doughnuts for his mates, well, that's Blind River. When the westbound train is early enough, say 5 a.m, it stops for coffee.
Update 2013-08: Trains are shorter, and at this time of year with more pulpwood loads. Most of the track has been re-ballasted, ties replaced, and some rail work has begun. 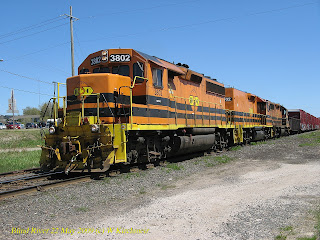 Genesee and Wyoming was a short line in northwestern New York State, serving the Genesee brewery. Sometime during the 1980s it transformed itself into a regional short-line operator, and now owns or leases lines in North America, Australia, and Europe. Look here for more. CPR built the Sudbury - Soo line when the Liberals were in power in the 1880s. They didn't want to spend the money to build north of Lake Superior. When Sir John A MacDonald won the next election, the all-Canadian route was reinstated, and the Sudbury - Soo line became a branch. 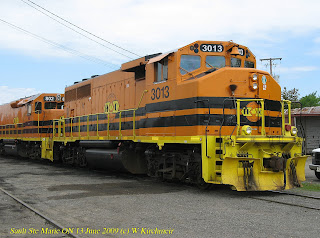 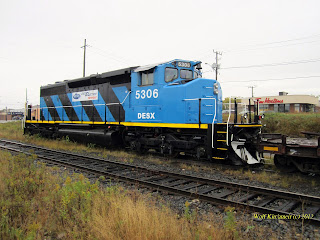 In 2010, Huron Central started improving the track by replacing ties, adding ballast, and replacing rail. DESX contracted to do the ballasting, and a for a while in 2011 I saw their engines and ballast trains in Blind River. September 2011. 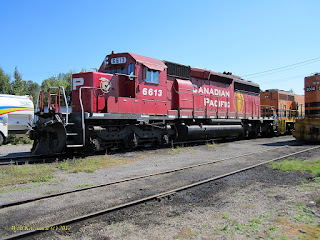 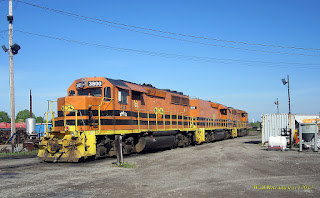 Huron Central also occasionally receives locomotives from Quebec Gatineau, like QG3802, in Sault Ste Marie in May 2012. QG800 behind it is a slug. It has no diesel engine, just electric motors, who receive their power from 3802. At low speeds, the diesel engine on 3802 has excess power available, so revving it up to supply electricity to 800 adds tractive effort. It's two locomotives for the price of one.  QG, like HC, is owned bu Genesee & Wyoming. 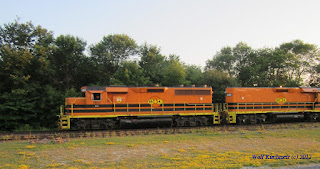 This is the usual power on a HCRy train: three GP-40 engines. Blind River, July 2012, you see the first two on an east bound train. 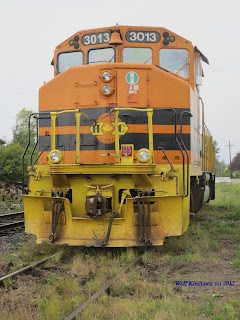 In September 2012, HC2013 was parked in Blind River overnight. I think it suffered some fault, so it was left for the westbound train to take back to the Sault for maintenance. 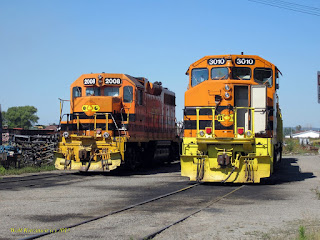 Quebec-Gatineau 2008 and HC3010 in Sault Ste Marie, September 2011. I like the orange, yellow and black livery of these engines. 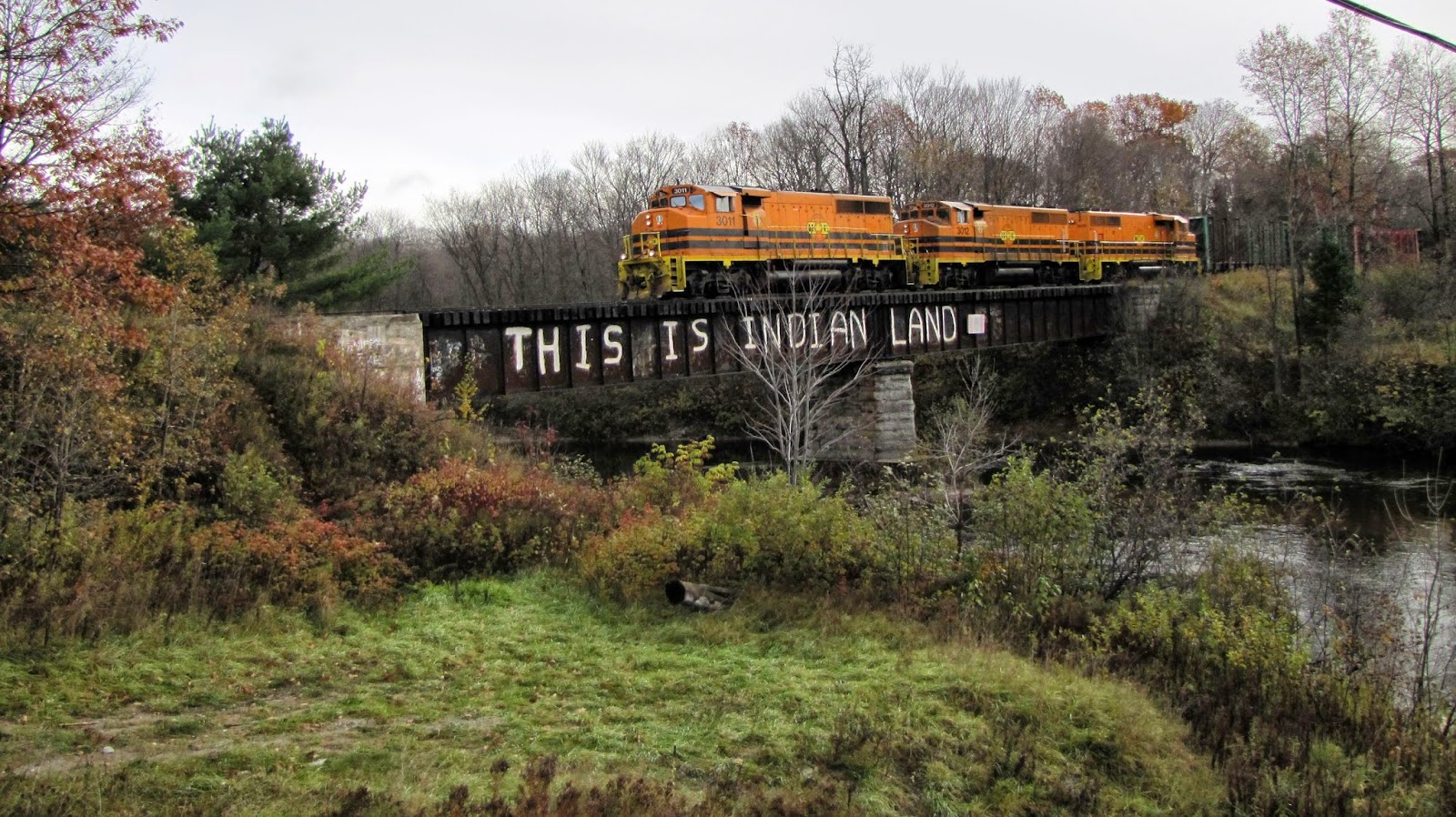 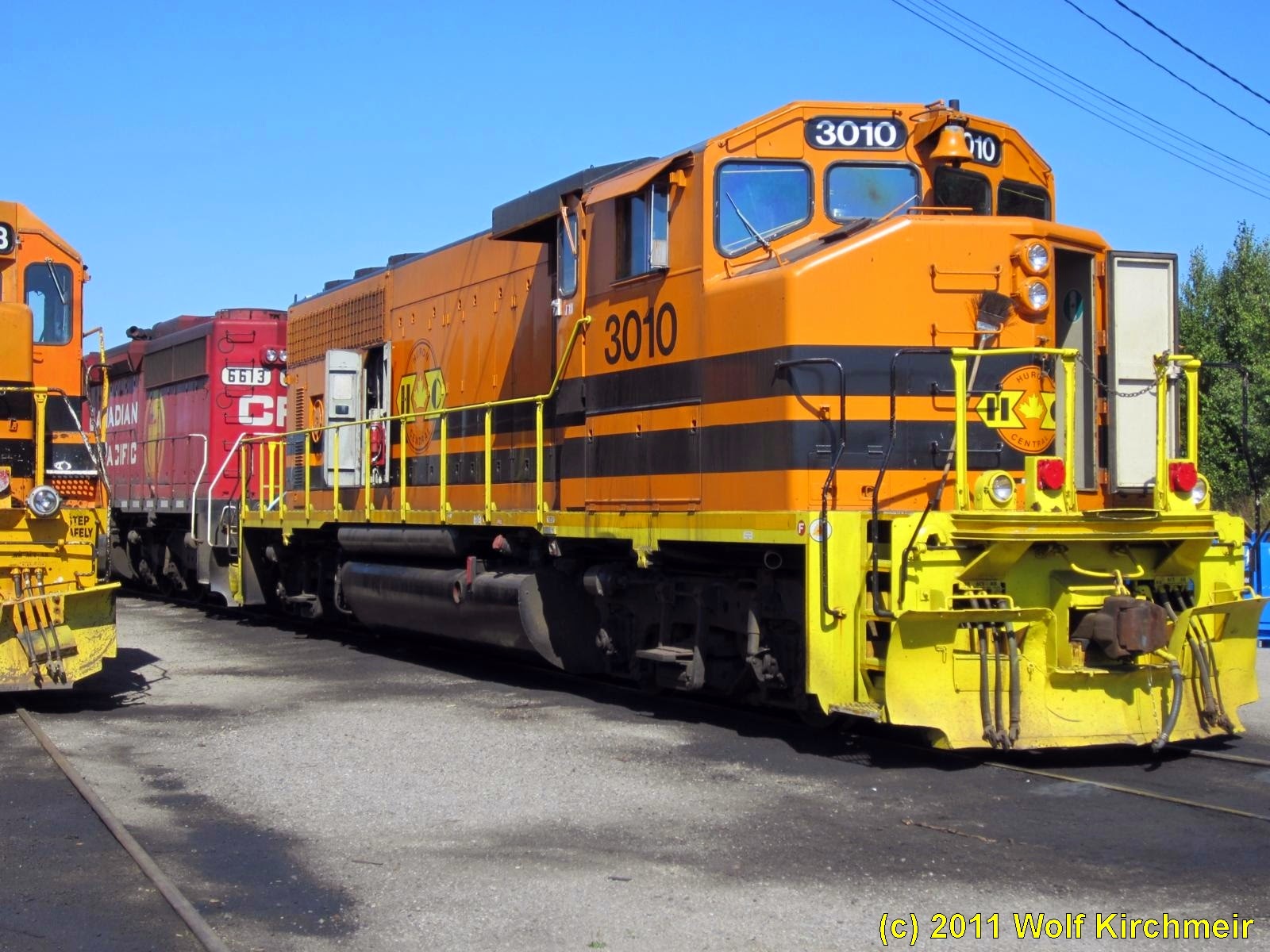 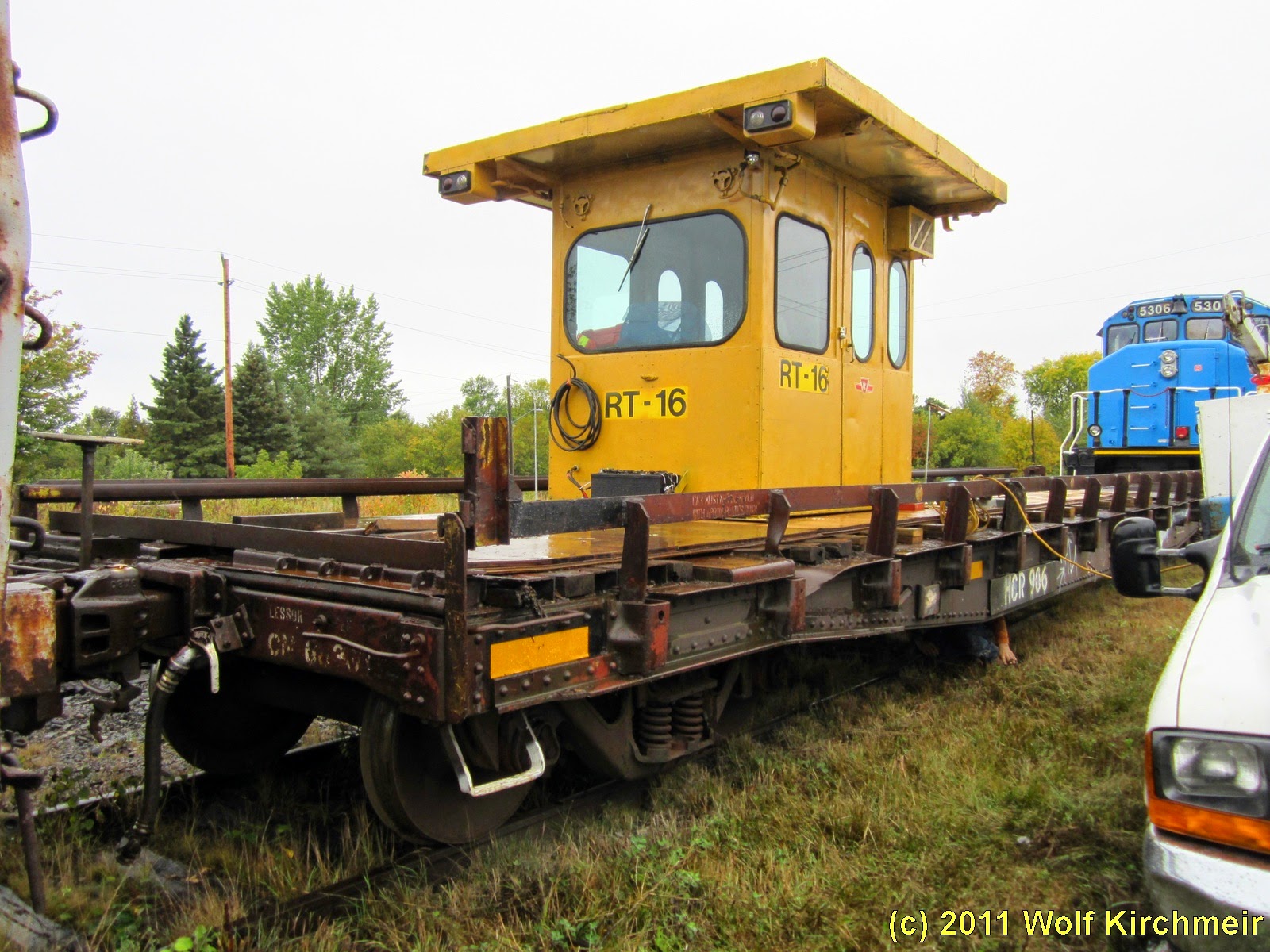 HC906 was a flatcar with a cabin salvaged from the TTC mounted on it. It was used during track upgrades in 2011-2012, presumably to shelter the workers when it rained. It was raining pretty hard when I took this photo. 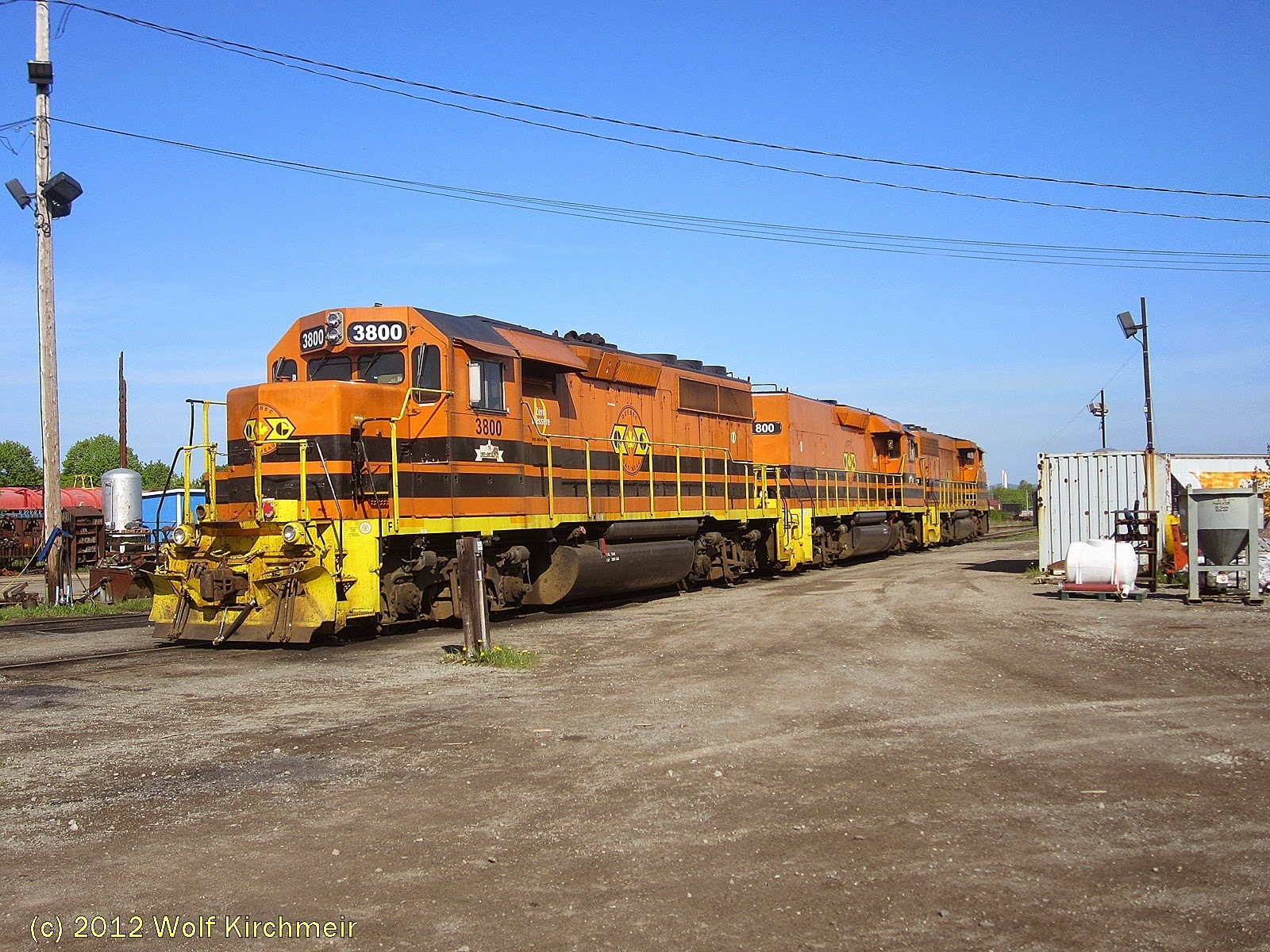 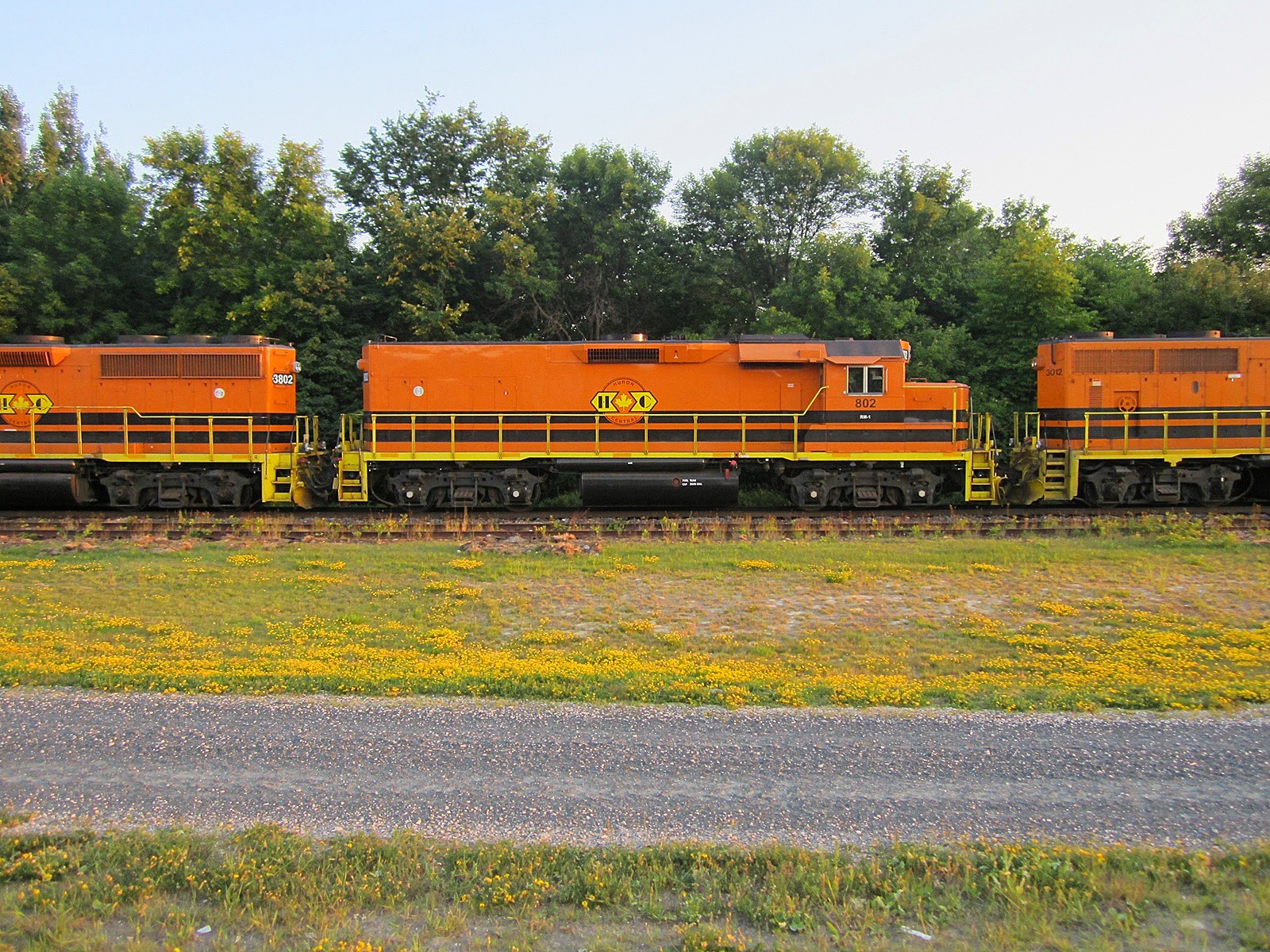 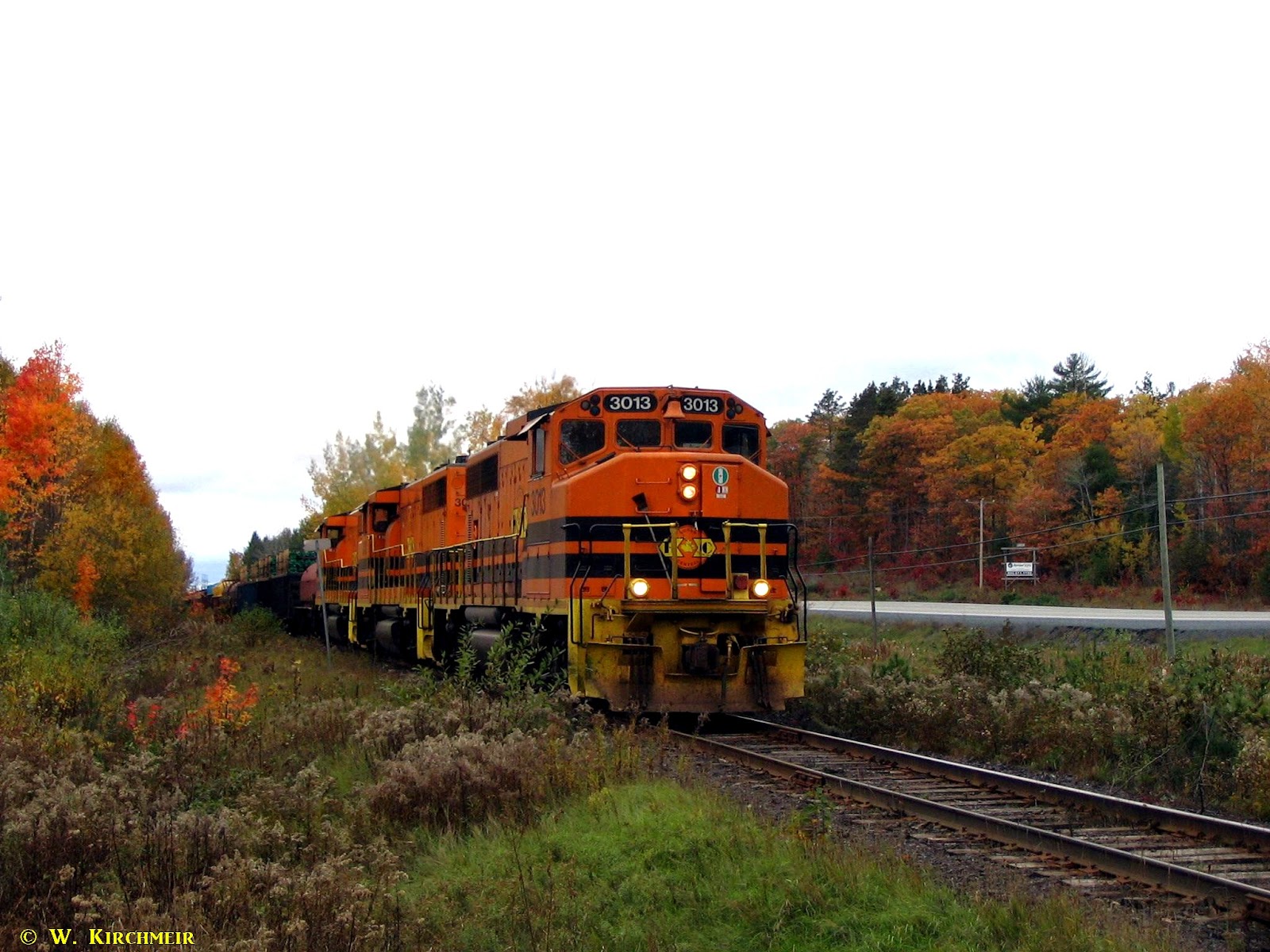 HC3013 eb Blind River 2005-10-18
These rebuilt GP-40s are the usual locomotives on the HCRy now.  Occasionally, HCRy rents motive power from CPRail or HCLX, but I haven't had a camera handy when they came through, or else it was at night. 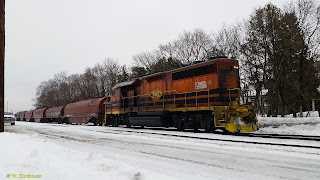 Quebec Gatineau 3008 on March 14, 2019. Unusually dirty for a Genesse &Wyoming engine. Huron Central has been assignes this engine for several years now.